8 Ways You May Be Eating Insects Without Knowing

Usually, it’s not such a bad thing to subscribe to the out of sight, out of mind notion. Unfortunately, that means you are eating insects without even knowing it.

I’m a big proponent of protein. Eggs for breakfast, grilled chicken for lunch, lightly seared filet of salmon for dinner—I can’t get enough. But even I have a limit, and that limit generally begins about the time I see exoskeletons, tentacles, pinchers, or stingers sticking out of my food.

I realize that in some parts of the world, eating insects is considered a reliable source of protein. But the people who eat those bugs do so willingly. It’s a normal part of their diet. Here in the United States, we’re pretty squeamish about eating insects on a china plate or stabbing our forks into larvae. And that’s why it might come as a shock to discover that, because of the FDA’s lax food-safety regulations, your food might very well be crawling with creepy, slimy, buzzing things of all sorts. In fact, it’s been estimated that eating insects accounts for a pound of ingested protein for humans a year. And I’m not talking about gummy worms here. I’m talking about real live (or formerly live) bugs.

With the help of Rodale.com writer Emily Main, we’ve identified a few of the more disgusting bugs you may be chomping on. Prepare to be grossed out: here are some common ways you might be eating insects. 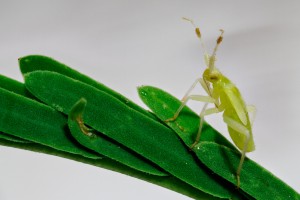 At anywhere from 1/25 to 1/8 of an inch long, these tiny little winged parasites are legally allowed in apple butter, canned or frozen asparagus, frozen broccoli, and frozen Brussels sprouts. Another incredibly common, yet uber-disgusting, way of eating insects unknowingly. 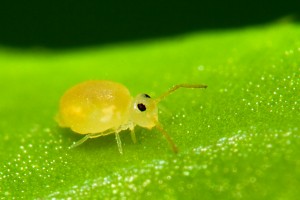 When it comes to eating insects, these same little green or black bugs that can destroy a bouquet of flowers can infiltrate your frozen veggies, particularly spinach, broccoli, and Brussels sprouts. And if you home-brew beer, you might consider growing your own hops: The FDA legally allows 2,500 aphids for every 10 grams of hops. 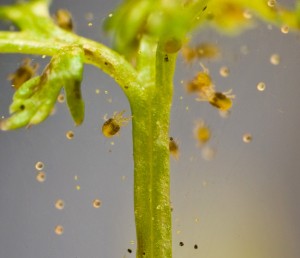 These tiny white bugs are common in wheat and other grains that have been stored for a while, but one of the more common ways of eating insects in frozen vegetables. And if you have indoor allergies, that could be a problem. Storage and grain mites can cause the same type of allergic reaction as the dust mites common in homes. 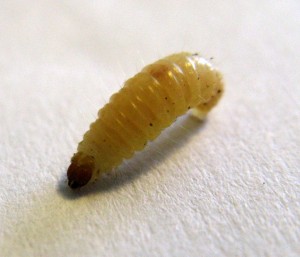 If you’ve ever eaten canned food, you’ve probably been eating insects (at least in a tiny amount) for some time. These disgusting little critters abound in things like canned mushrooms, canned tomatoes, tomato paste, and pizza sauces, as well as fresh or frozen Maraschino cherries. Mushrooms are by far the worst: 20 maggots are allowed for every 100 grams of drained mushrooms, compared with between 1 and 5 for every 500 grams of tomato products.

Eating Insects In Your Apples and Bananas: Fruit Flies 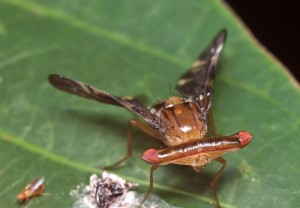 Buy a piece of fruit covered in fruit flies, and you can wash them off. Buy a can of citrus juice, and you’ll be swilling five fruit flies with every 8-ounce cup of juice. Grab an 8-ounce handful of raisins and you could be eating as many as 35 fruit-fly eggs. 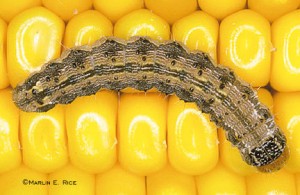 Corn is notoriously difficult to grow organically, because it’s prone to insect infestations. But in most cases, it’s easy to avoid eating the earworms that burrow into corncobs and eat the silk—just cut the kernels off the cob, and voilà! However, canned sweet corn will come with some extra crunch from all the larvae, skins, and skin fragments allowed by the FDA.

Love black-eyed peas? Buy them dried and cook them yourself, rather than buying them frozen or canned. A can of black-eyed peas, cowpeas, or field peas may contain an average of five or more cowpea curculio larvae, which will grow into dark brown, beetle-like weevils that infest all manner of peas and beans. 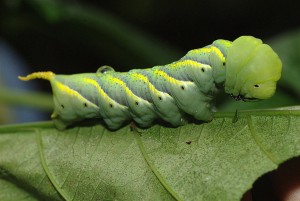 Fuzzy, ugly caterpillars are supposed to turn into beautiful butterflies for people to marvel at—not eat in a mouthful of frozen spinach. But along with the 50 or so aphids, mites, and thrips allowed in 100 grams of spinach, you may also find yourself munching on caterpillar larvae and larval fragments. Mmm . . . probably not what was giving Popeye all that strength. – Source

If the list of bugs commonly found in your favorite veggies didn’t freak you out, why not consider eating bugs intentionally? After all, it does have its benefits.

Could beetles, dragonfly larvae and water bug caviar be the meat of the future? As the global population booms and demand strains the world’s supply of meat, there’s a growing need for alternate animal proteins. Insects are high in protein, B vitamins and minerals like iron and zinc, and they’re low in fat. Insects are easier to raise than livestock, and they produce less waste. Insects are abundant. Of all the known animal species, 80% walk on six legs; over 1,000 edible species have been identified. And the taste? It’s often described as “nutty.”

The vast majority of the developing world already eats insects. In Laos and Thailand, weaver-ant pupae are a highly prized and nutritious delicacy. They are prepared with shallots, lettuce, chilies, lime and spices and served with sticky rice. Further back in history, the ancient Romans considered beetle larvae to be gourmet fare, and the Old Testament mentions eating crickets and grasshoppers. In the 20th century, the Japanese emperor Hirohito’s favorite meal was a mixture of cooked rice, canned wasps (including larvae, pupae and adults), soy sauce and sugar.

Over the past two years, three Dutch insect-raising companies, which normally produce feed for animals in zoos, have set up special production lines to raise locusts and mealworms for human consumption. Now those insects are sold, freeze-dried, in two dozen retail food outlets that cater to restaurants. A few restaurants in the Netherlands have already placed insects on the menu, with locusts and mealworms (beetle larvae) usually among the dishes.

Insects have a reputation for being dirty and carrying diseases—yet less than 0.5% of all known insect species are harmful to people, farm animals or crop plants. When raised under hygienic conditions—eating bugs straight out of the backyard generally isn’t recommended—many insects are perfectly safe to eat.

Meanwhile, our food needs are on the rise. The human population is expected to grow from six billion in 2000 to nine billion in 2050. Meat production is expected to double in the same period, as demand grows from rising wealth. Pastures and fodder already use up 70% of all agricultural land, so increasing livestock production would require expanding agricultural acreage at the expense of rain forests and other natural lands. Officials at the United Nations Food and Agriculture Organization recently predicted that beef could become an extreme luxury item by 2050, like caviar, due to rising production costs.

Raising insects for food would avoid many of the problems associated with livestock. For instance, swine and humans are similar enough that they can share many diseases. Such co-infection can yield new disease strains that are lethal to humans, as happened during a swine fever outbreak in the Netherlands in the late 1990s. Because insects are so different from us, such risks are accordingly lower.