5 Scary Preservatives You Didn’t Know Were in Your Food

Food additives are the norm in today’s market. As a matter of fact, we’ve pretty much come to accept the fact that most f what we buy is going to have some type of additive or preservative thrown in.

While some food additives can have a minimal impact, others are downright scary. Here’s some of the creepy stuff major food manufacturers put in your food without your knowledge.

Partially hydrogenated fats are the principle sources of trans fat in the American diet, and a Harvard study estimated that trans fat causes 70,000 heart attacks every year. The good news: Partially hydrogenated oils are beginning to slowly retreat from our food. Progressive jurisdictions like New York City are starting to restrict the allowable amounts in restaurants, and many chains are switching to healthier frying oil. Still, the battle isn’t over. At Long John Silver’s, for example, there are still 17 menu items with more than 2 grams of the stuff. According to the American Heart Association, that’s about the maximum you should consume in a single day. 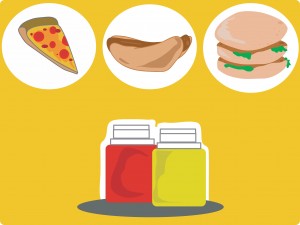 This chemical is used most frequently in the production of industrial foam plastic, and although the FDA has approved its use for food in the States, the United Kingdom has labeled it a potential cause of asthma. In a review of 47 studies on azodicarbonamide, the World Health Organization concluded that it probably does trigger asthmatic symptoms. The WHO concluded, “exposure levels should be reduced as much as possible.” I’ll put it more concisely: Avoid it.

Aspartame is a zero-calorie artificial sweetener made by combing two amino acids with methanol. Most commonly used in diet soda, aspartame is 180 times sweeter than sugar. Over the past 30 years, the FDA has received thousands of consumer complaints due mostly to neurological symptoms such as headaches dizziness, memory loss, and, in rare cases, epileptic seizures. Many studies have shown the sweetener to be completely harmless, while other have linked the additive to cancer. A 2006 Italian study found that rats fed high daily doses of aspartame—the equivalent of nearly 3 liters for a 150-pound human—experienced higher levels of lymphomas, leukemia, and other types of cancer. Still, after reviewing the study, the FDA concluded that the results weren’t strong enough to warrant the confectionary chemical’s removal from the market.

The are nitrogen-based compounds that are essential for digestion in small amounts. They occur naturally but are synthetically produced for use in fertilizer and as food additives. They’re commonly used to cure processed meats. Nitrates and nitrites have a tendency to fuse with amino acids to become carcinogenic nitrosamines. Ironically, the processed meats into which nitrates are commonly added are rich with amino acids, making nitrosamine formation very likely. In addition to concerns about cancer, increased nitrate and nitrite intake has been linked to deaths in Alzheimer’s, type 2 diabetes, and Parkinson’s patients. Despite the risks, the valuable use of nitrates and nitrites as inhibitors of botulism warrant their acceptance as food additives in the eyes of the FDA.

Parabens are used to prevent mold and yeast formation in food, and they’re also used in cosmetics, toothpaste, and personal lubricant. Although they exist in nature, the parabens used in commercial products are created synthetically. It’s been documented that parabens act as mild estrogens, and according to the Environmental Working Group, they can disrupt the natural balance of hormones in your body. In a Japanese study, male rats fed propyl paraben daily for four weeks suffered lower sperm and testosterone production, and other studies have found parabens present in breast cancer tissues.

Of all the food additives listed above, the one that is constantly linked to death in humans is trans fat. Check out the following video to learn a little more about how trans fat impacts your body.

The best way to avoid these food additives is to shop for natural foods. Start shopping for organic foods at natural food stores and farmer’s markets. You may also want to go on some kind of detox diet and do a liver cleanse to help flush some of those preservatives out of your system.